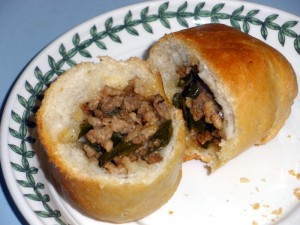 Stuffed pistolettes (small oblong rolls) are supposed to be delicious, but too often, the deep-fried orbs are leaden and greasy.  Cousins to the crawfish bread popular at Jazz Fest, stuffed pistolettes feature a meat or seafood (and often cheese) filling, surrounded by (in theory) a crisp, yeasted roll.  The fried, seafood-filled fried version became popular in the mid-80s all around south Louisiana, popping up everywhere from local fast-food chains to festivals to home kitchens.  Food-service vendors sell IQF versions by the case.

Techniques and recipes vary:  most recipes call for prebaked rolls to be split, filled, and re-baked or deep-fried to add crunch, and a rare few use frozen dough stretched around a filling, proofed, then baked or fried.  Sadly, the bread always seems an afterthought…I like a crisp, fresh roll baked around a deeply flavored, non-runny filling.  Deep-frying is overkill–it’s only needed if a mushy, supermarket roll is used.

Here’s my version, which uses King Arthur Flour’s crusty hard roll recipe as the base.  No shortcuts, no fillers, no junk, no frying.  The recipe seems long, but it’s not complex.  The steps are spread out over three days, with short periods of activity each day.

Day 1: Make a starter for the bread dough by combining 1/2 cup water, 1 cup all purpose flour, and 1/8 tsp instant yeast.  Stir all ingredients together in a small bowl until smooth.  Cover loosely with plastic wrap and rest at room temperature overnight.

Day 2: Make the dough by combining all of the starter (above) with 3 1/2 cups AP flour, 1 cup of water, 1 1/2 tsp salt, and 1/4 tsp instant yeast.  Knead by hand or machine until the dough is cohesive but still a little shaggy (about 5 minutes in a stand mixer using a dough hook).  Transfer to a large, oiled container and allow to rise for 3 hours, covered; after the first hour, gently degas the dough and fold it over.  Repeat the degassing and folding again after two hours.

While the dough rises, prepare the filling.

Once the dough is risen, shape and fill the rolls.  Place the risen dough onto a floured countertop and divide it in half, then divide each half into thirds, and next divide those pieces in half, making 12 equally sized pieces.  Shape the pieces into balls, then flatten to 1/4–1/2″ thick disks.  Place 2 rounded tablespoons filling on each round, then pinch the dough around the filling, sealing the center first, then pinching outward to the left and right.

Fold the two pointed ends toward the middle, pinching firmly to seal.  Gently turn the roll over, seam side down, and place a parchment-lined baking sheet.  Cover the rolls with a piece of greased plastic wrap and refrigerate overnight.  Alternatively, allow the rolls to proof at room temperature for 1 hour, then bake.

Day 3: Take the rolls out of the fridge.  Brush the tops with a little melted bacon grease and (very gently, using a lame) slash a shallow cut into each roll’s top (or make a short snip with sharp scissors).  Bake in a preheated 425-degree oven until deeply golden brown (about 20 minutes).  Cool on a wire rack.

Eat the filled rolls within an hour or two.  Uneaten rolls should be refrigerated; reheat in a toaster oven at 250 degrees.

One thought on “Little stuffed breads”