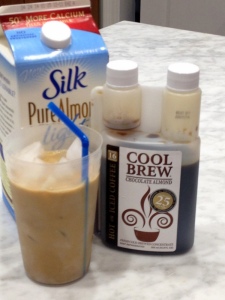 In my kitchen, certain foodstuffs rate “necessity” status.  Like eggs, milk, flour, bacon….and CoolBrew coffee concentrate.  I (almost) can’t live without the stuff–it fuels my workaday, commuter-morning iced coffee, which I usually mix with CB’s original coffee/chicory concentrate and light almond milk or lactose-free 2% milk.  (Though my very first caffeine of the day is still a macchiato, thanks to Mr. Bouillie.)

Compared with the cost of iced coffee from a coffeehouse, CoolBrew is a downright bargain.  The stuff stays fresh in the fridge for quite a while, thanks to the air-restricted, squeeze-dispenser packaging.*

Making my own iced coffee also allows me to sleep 15 minutes later, as I don’t need to detour by a coffee shop on my way to work.  In warmer weather, I use more ice or blend it; my “winter” iced coffee contains a cube or two.

For 2014, CoolBrew is celebrating its 25th year in business with a limited-edition flavor:  chocolate almond, one of the original flavors introduced all those years ago.  (I’m generally not a fan of flavored coffees, but the anniversary chocolate almond is subtle, not overpowering.)  Look for it at Dorignac’s, Whole Foods, Wal-Mart, and many other area stores.

Best of all:  after a quarter-century, CB is still family owned and (cold) brewed in New Orleans, right in the heart of Mid-City.

*And “people” tell me that recycled CoolBrew bottles make great temporary flasks, thanks to the squeeze & measure dispenser built into the bottle.  File this hint away for next year’s Mardi Gras parade preparations.