Shrimp and grits, with Abita Golden 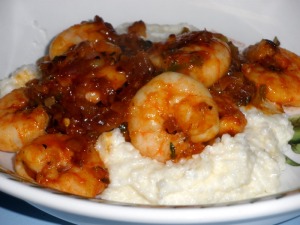 Abita Brewery’s new cookbook, Abita Beer:  Cooking Louisiana True, stimulated my appetite as I thumbed through it this week.  It features recipes contributed by chefs, home cooks, and the brewery folks.  Today’s trip to the farmer’s market yielded a pound of fresh shrimp and red onions grown right here in St. Charles parish–inspiring me to rustle up a brunch of shrimp and grits.

The cookbook’s shrimp and grits recipe was contributed by Emeril’s NOLA restaurant, and it reads like  a typical recipe straight off the kitchen line, calling for multiple items requiring their own ingredients and recipes.  Sorry, Mr. Lagasse:  I’m a home cook, and I’m not going to cook a half pound of bacon, make a spice mixture, smoke cremini mushrooms over applewood, grill green onions, make an Abita beer glaze, cook a pot of grits with butter, cream, and smoked cheddar, and then whip up a buerre blanc, all for one dish–and all before I actually cook the dish itself.  But I did make the Abita “beer-b-cue” glaze as described in the NOLA recipe, and I winged the rest.  A short trip out the back door yielded fresh bell peppers, hot wax peppers, and fresh thyme:  way better than the dried spices in the original recipe’s “essence” mixture.

My shrimp and grits

Boil water, salt and heavy cream together in a saucepan, then add grits.  Reduce heat to low, cover, and cook for 25-35 minutes, until very creamy.  If grits seem too thick, add a little more water near the end of the cooking time.

Combine the smoked paprika, salt, and oregano; toss with the shrimp in a bowl and set aside.

In a small saucepan, boil together beer, ketchup, pepper flakes, and brown sugar for 15 minutes, until thick enough to coat the back of a spoon; reserve for later use.  The cookbook recipe calls for Amber; I used Golden, left over from watching LSU win the College World Series (geaux, Tigers!)

In a large skillet, heat olive oil over medium-high heat and saute peppers, onion, thyme, and garlic until fragrant and soft.  Push them to the sides of the skillet and place seasoned shrimp in a single layer; increase heat to high.  Notice my nifty, left-handed, flat-ended spoon:  it was hand-carved from osage orange wood by the Spoon Mill of Denham Springs, LA.

Sear shrimp on one side (2-3 minutes), then turn over and sear the other side.  Once undersides are colored, stir in 1/2 cup of reserved beer glaze and fold shrimp, sauteed aromatics, and glaze together.  Cook briefly to combine, then spoon over hot, cooked grits.

Note:  you’ll have plenty of leftover beer glaze; it will make a nice dipping sauce or finishing glaze for grilled chicken.

2 thoughts on “Shrimp and grits, with Abita Golden”