Naan on the Big Green Egg 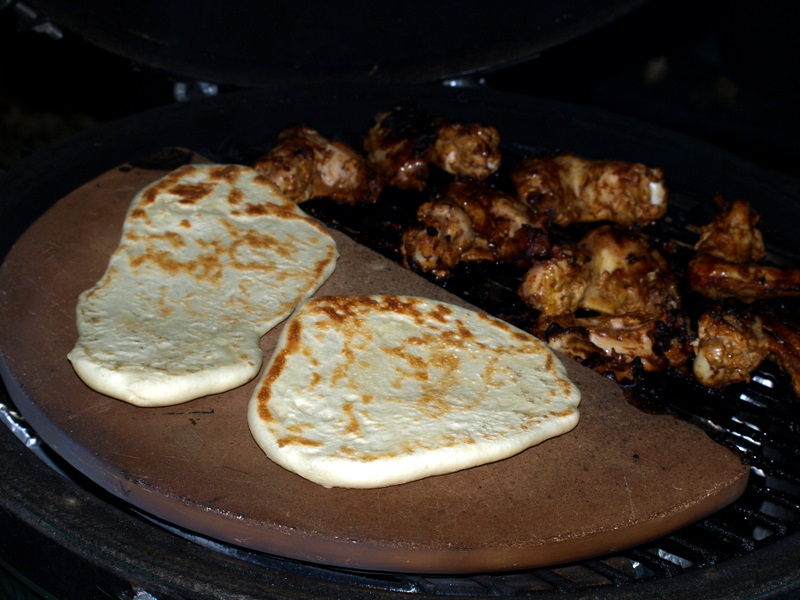 Can you believe it?  You don’t have to pinch yourself—we’re not having  a collective regional hallucination.  THE SAINTS REALLY WON THE SUPERBOWL LAST NIGHT!!!!

While the boys in Black and Gold schooled the Colts, I stuck to my football-season ritual of non-traditional football foods and cooked up a mess of tandoori chicken wings on my Big Green Egg, accompanied by a pile of naan.  Buttery, flaky naan (plain or filled) is the highlight of an Indian meal.  The Cajun in me delights at any form of bread designed to soak up liquid.  But naan at home seemed too tricky; I occasionally resort to frozen naan from the international supermarket.

But then I got a Big Green Egg, which is just a cousin of the tandoor oven (or tanur, or tonir, or tone, depending on the country).  Tandoori ovens are cylindrical, charcoal-fired clay ovens, and naan (and many other flatbreads from many other cultural traditions) is cooked directly on the hot, inner surface of the oven.  While the Egg’s design doesn’t allow for direct-contact interior cooking, it’s easy enough to add the plate setter and a baking stone to create a hot, dry, ceramic surface perfect for flatbreads.  A half-moon stone allowed me to turn out a few breads at a time while the wings continued to cook.

After checking out various naan recipes, I (mostly) followed Neelam Batra’s formula from 1,000 Indian Recipes (p 594), allowed the dough to rise for 1 hour at room temp, stretched & folded it a few times, then refrigerated for more than 4 hours.  An hour or so before cooking, I rolled the breads as thinly as possible, stacked them between parchment, and fired up the grill.   The breads cooked in mere minutes, so I didn’t miss a second of the BIGGEST GAME OF THE 21ST CENTURY.

Mix yeast, sugar, and water in a 2-cup measure with a spout or small bowl.  Add yogurt and vegetable oil.  Reserve.  Place flour and salt in the bowl of a food processor; pulse 3-5 times to mix.  With the motor running, pour the liquid ingredients into the processor through the feed tube.  Continue to process until a dough forms and the mixture becomes cohesive.  Remove the dough from the processor and knead three or four times by hand.  Place in a lightly oiled bowl, covered, at room temperature.  Wait 10 minutes, then stretch and fold the dough three times.  Wait an additional 10 minutes, repeat the stretch & fold, then refrigerate until ready to use (dough will keep, chilled, 4-8 hours).  It will rise slightly in the refrigerator.

When ready to bake, set up a charcoal grill for indirect heat and place a baking stone atop the grill surface.  (Using a Big Green Egg, insert the plate setter, legs up, replace the grill surface, then place a baking stone atop the grill.)  Preheat the baking stone at least 45 minutes to an hour at a dome temperature of at least 350 degrees.  Hotter is better, as the breads will cook quickly, puffling & flaking.  Remove the dough from the refrigerator; cut or pull off golfball to tennis ball sized hunks of dough.  Roll out as thinly as possible, flouring the rolling surface very lightly as needed.  (Rolled breads can be layered in parchment or placed on a baking sheet until cooking time.) 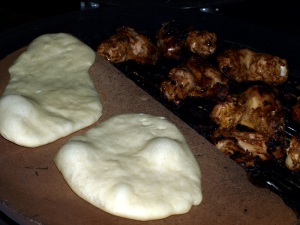 To bake, carefully transfer the rolled dough onto the stone and close the lid.  Wait 2-3 minutes (or more or less, depending on the temperature).  The breads will puff and swell, browning/charring slightly in spots on the bottom.  Once the breads puff and brown, quickly flip each one over.  Continue cooking, lid closed, until browned in patches on the bottom side.  Remove from heat, brush with the garlic butter, and serve hot.  Recipe makes 7-10 breads, depending on size.

To flavor the breads, add garlic, tumeric, chopped cilantro, or other flavorings into the food processor along with the liquid ingredients.  Or, sprinkle kalonji seeds or sesame seeds onto the breads while rolling them out.  Or try my absolute favorite–keema naan—and spread seasoned, ground lamb or beef  onto one rolled-out bread, fold it in half, and re-roll.

3 thoughts on “Naan on the Big Green Egg”