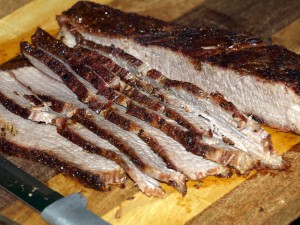 Small, flat-cut briskets showed up in the supermarket meat case this week.  Weighing in at around 3 pounds apiece, the little brisket cuts were perfect for an oven or stovetop braise: so I decided ignore common sense and try smoking it on the Big Green Egg.

Low-and-slow large brisket cooks usually take hours (like 12 to 18), and the cut’s generous fat cap prevents the meat from drying out during the slow smoking.  My bitty brisket had no such fat cap, yet it still needed long, slow cooking to convert its abundant but chewy collagen into fork-tender gelatin.  Thanks to BGE master ThirdEye over at the Egghead Forum, I was saved from turning this piece into shoe leather:  foiling the brisket would prevent it from drying out.

After applying Rudy’s barbecue rub, the brisket cooked (on the big Green Egg, indirect, on a grate over the legs-up platesetter) for three hours at 250, with a bit of applewood smoke.  It picked up flavor and a nice color prior to the next step:  I wrapped it in aluminum foil and poured half a bottle of Mexican Coca Cola into the pouch.  Back onto the grill it went, to braise inside the foil for an additional 2 and a half hours at 275.

The almost completely lean brisket emerged succulent and tender, with no need for sauce, so I’m counting the hybrid smoke/braise as an unqualified success.  A bonus:  with a 5-hour cook time, it was easily the fastest brisket cook I ever attempted, and a testimony to the cooking knowledge found on a good Internet messageboard.