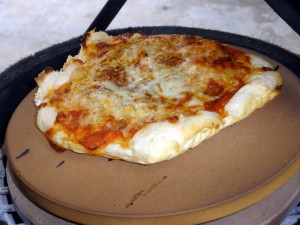 A few posts ago, I chronicled my longing for a Forno Bravo pizza oven…and it’s pure, pointless want, because I already have a perfectly good pizza-making setup:  a Big Green Egg Mini, plus two 8″ pizza stones.  The Mini is the smallest-sized ceramic, kamado-style cooker made by BGE.  Lots of folks dismiss the tiny grill (the cooking grid is just 9″ across) as a toy, or as an overpriced hibachi, but I find it almost as versatile as the larger Eggs (see other Mini cooking exploits here, here, and here). 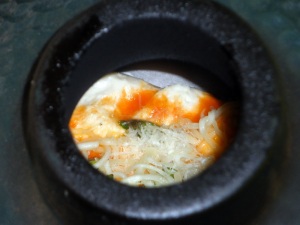 My Mini reliably hits 550 degrees within 15 minutes of lighting, and with only a bit of effort (like removing the metal vent cap, see left), it will exceed 650 degrees.  So–serious, fast-cooked, napoletana style pizza is possible, provided that the pies aren’t more than 8″ in diameter….the perfect size for individual pizzas.  To make pizza-ing easier, I recently ordered a raised grid to fit the Mini from the Ceramic Grill Store, which will allow me to insert one stone closer to the raging charcoal fire and add another stone suspended slightly above it.  While I await the arrival of my MiniWoo, I’m still cranking out pizzas:  I place one stone directly on the grill, coil up a length of aluminum foil into a spiral atop the first stone, then put the second stone atop the foil spiral.  (The spacing provided by the foil is important:  you need very high but evenly distributed heat to cook pizzas.) 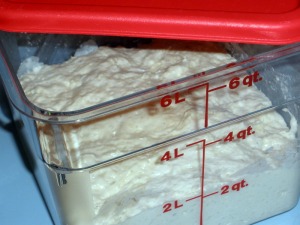 For my latest pizza jag, I followed Jim Lahey’s 2-hour pizza dough recipe (from My Bread, p 117), substituting Del Verde’s 00 Italian pizza flour (sourced locally from Nor-Joe Imports) for the recipe’s indicated bread flour.  When made with bread flour and baked on a sheet pan, the crust is nearly identical to the thin, crunchy crusts of Rome’s pizza al taglio (pizza sold by the slice).  On the other hand, the 00 flour yielded a softer, tender-crisp crust much closer to the pizzas of Naples.  The dough proved too slack to stretch, so I patted it out into rough circles on parchment paper. 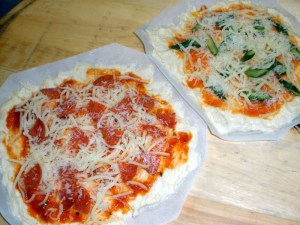 Topped lightly, with a fresh tomato sauce, slivered asparagus, and low-moisture supermarket mozzarella cheese, the 8″ pies cooked in less than 5 minutes.  Other pies, topped more generously with thicker marinara sauce, pepperoni, and cheese, took a bit longer.  And the crust?  The combination of wet dough and 00 flour created a puffy, lofty, yet crisp crust.  Without an overnight rise, the upper edges of the crust didn’t brown quite as much as I like, but the taste and texture were very nice. 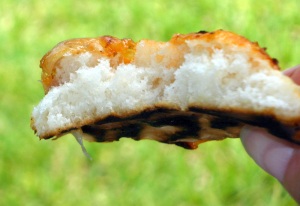 Place flour, yeast, salt, and sugar into a large mixing bowl.  Pour in water, then stir with a wooden spoon until all flour is hydrated.  If mixture is dry, add additional water just a teaspoon or two at a time.  Cover bowl; rest at room temperature for 2 hours.  Dough should double in size.  Divide dough into two.  Divide each half into four portions and pat into 8″ circles on parchment paper.  Top as desired.  Bake on a preheated pizza stone at 550-650, preferably over a charcoal fire.