My past attempts to cultivate a wild-yeast sourdough starter have all ended in failure.  Sure, everything looks okay in the beginning, but eventually, the poor little starters all died.  Or maybe they weren’t ever growing yeast at all?

As it turns out, the lively, early activity in my starters might not have been wild yeast at all.  A bacteria called leuconostoc, present in most American flours, gives off carbon dioxide just as yeast does, so an infected starter will indeed bubble merrily.  Except that leuconostoc, which is one of the lactic-acid producing microorganisms responsible for turning cabbage into sauerkraut,  inhibits the growth of wild yeast in the initial stages of starter cultivation.  As it turns out, lots of people have trouble establishing a starter, thanks to this inconvenient bacterium. 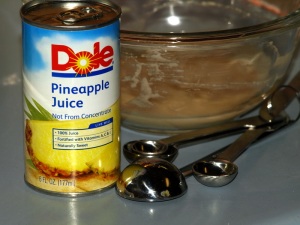 So what’s the solution?  Pineapple juice.  (Read more about the pineapple juice solution to the leuconostoc problem, and find out just how a group of intrepid bakers figured it out.)  Baker Peter Reinhart’s new book Artisan Breads Every Day contains sourdough instructions distilled from the experiences of hundreds of recipe testers and the bakers over at King Arthur Flour’s Baking Circle message board.  Pineapple juice immediately acidifies the flour mixture, inhibiting the bad bacterium and providing an extra bit of sugar to encourage the yeast.  The pineapple juice contains some added vitamin C (ascorbic acid), which is also a friend to yeast. 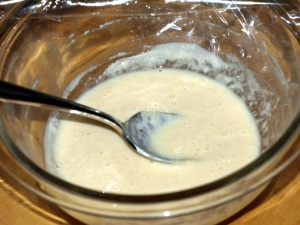 Armed with lots of new knowledge, I’m trying again.  I mixed 1/4 cup pineapple juice with 3-1/2 T flour (half unbleached bread flour, half white whole wheat).  For the first 48 hours, I’ll stir the starter three or four times, vigorously, for at least a minute (yeast loves fresh oxygen and leuconostoc hates it).  After 24 hours, the starter looks exactly the same….which is progress, I guess, as it seems I’m not growing bad, gassy leuconostoc!