I opened a fresh bag of lump hardwood charcoal this weekend and set out to see how many things I could cook on one firing of the BGE.  The damn thing holds heat so well that I feel a little wasteful when I cook a single dish on it–think of all the leftover heat!  So I tried to harness every bit of the fire.

First up:  roasted Hatch chiles (sorry, no pics), cooked during the initial period of rapid temperature increase.  My BGE heats up from 0 to 550 in just 15 minutes; the quickly changing temps don’t affect roasting chiles one bit.  Toss the chiles directly onto the grill; wait until blackened, then turn, cooking all sides.  Remove to a covered plate or brown paper bag; allow the chiles to soften & cool.  Peel off the thin, bitter, roasted skin; remove the stems and seeds.  Store, refrigerated up to a week or so.  Roasted Hatch chiles make a tasty addition to chili, tacos, nachos, burgers, potato salad, cheese toast, omelettes….

Next:  I popped on the plate setter and baking stone (for indirect cooking), intending to bake bread.  Made of thick, thermal ceramic, both require at least 45 minutes preheating.  Uh-oh:  heat’s a wastin’!  So I tossed on baking potatoes, rubbed with olive oil and coarse salt, to soak up the heat while my no-knead baguette proofed (more on no-knead baguettes tomorrow).

On to the bread baking….30 minutes at 450 yielded a dark brown bottom crust and lightly browned upper crust.  (I should have flipped the loaf over during the last 10 minutes for more even coloring).  Bread and baked potatoes finished, I moved on to the day’s entree,,, 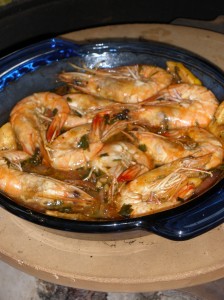 Barbecue shrimp!  Though Louisiana’s August inshore shrimp season has been pretty poor, I found a few pounds of nice shrimp in Leeville last weekend.  New Orleans style barbecue shrimp recipes abound, with a recent trend toward stovetop cooking rather than the traditional baked method.  I prefer the flavor of the oven-baked version, though it requires careful attention to prevent overcooking.  Accompanied by the freshly baked no-knead loaf, the shrimp made a fine lunch.

Rinse a pound of 16-24 or larger shrimp (in their shells, heads on).  Melt 4 T salted butter in a saucepan, adding a few shakes of worcestershire, juice of half a lemon, 1 T chopped fresh rosemary, three or four cloves minced garlic, a ridiculous amount of black pepper, and a bit of sliced onion & lemon, and simmered it all together until fragrant.  Arrange shrimp in a single layer in an oven-proof baking dish; pour the butter mixture over the shrimp, and toss to coat the shrimp.  Re-arrange shrimp to lie flat in dish.  Bake at 350-400 degrees, until shells separate from the shrimp along the outside back curve (a small space will open up and the shell in this area will be translucent).  Total baking time will depend on the shrimp’s size.  If baking on a grill, turn the shrimp over after 5-6 minutes.  Depending on your grill’s heat, additional turning may be required.