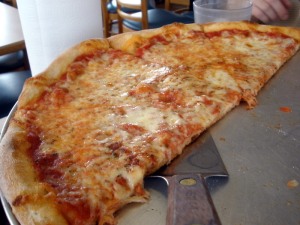 Peter Reinhart describes “college town pizza” in his book American Pie, including it as one of the archetypical U.S. pizza styles.  College town pizza is thin, but sturdy enough (thanks to higher gluten flour) to hold lots of toppings, with a nicely bready edge.  Sadly, in most college towns these days, awful chain-restaurant pizza is the rule, thanks to coupons, free delivery, and incredibly cheap prices made possible by mass production and subpar ingredients.

Not so in Ada, Ohio, a tiny college town home to Ohio Northern University.  Here, independent pizzerias (at least 4, by my count) line Main Street, scattered from one end of town to another.  The local pizzerias even outnumber chain restaurants (not so hard, as Ada suppports just two:  Subway and the year-old McDonalds).   A standout from the pizza pack:  Viva Maria, where college kids (under the tutelage of an Italian proprietor) craft a housemade dough into pizzas, calzone, and stromboli.  It’s nice to know, in the era of franchised pizza, that a town of 6,000, lost in a sea of corn, soybean, and beet fields, can support such a flowering of non-standardized food.

And now for the trivia quiz:  what athletic innovation happened on the football field at ONU?