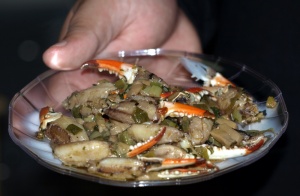 We started Christmas dinner with sauteed crab claws, a platonically simple dish.  It’s an easy hot appetizer, a crowd-pleasing finger food.  Here’s the recipe:  buy a pound or two of cocktail claw fingers.  [For the uninitiated, these are peeled, blue crab claws broken down into a nugget of meat attached to one pincer and a featherbone.]  Melt a stick of butter in a large skillet (NOT nonstick, as the crab shell will scratch up the finish), add as much chopped garlic as you can stand, a pound of sliced mushrooms, a sprinkling of cayenne, and a drizzle of worcestershire sauce & a squeeze of lemon.  When the mushrooms are tender & golden, add the crab claws and two bunches of chopped green onions.  Fold the mixture until the claws are heated through.  Serve with lots of french bread, and a cocktail fork for scooping up the mushrooms & other tasty bits remaining on the plate after the claws are gone. 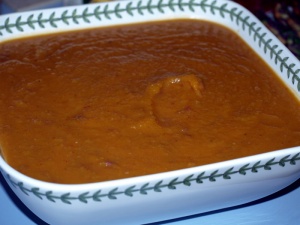 For the soup course, we (gasp!) didn’t have gumbo.  Instead, I made sweet potato andouille soup, using excellent andouille from Wayne Jacob’s smokehouse in Laplace, LA.  Various versions of the recipe exist, often embellished with cream or heavy spices.  To me, adding dairy doesn’t improve the dish, and when the andouille is as good as Wayne Jacobs’, why not let its flavor shine through?

Merry Christmas from Louisiana, where it is hot, muggy, and moist–perfect weather for fishing!