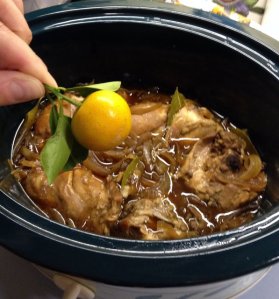 Though I’ve owned a slow cooker for years, I use it mostly to keep things warm.  Rarely do I cook any dish from start to finish in it, mainly because I miss the browning and caramelization generated by the first steps of a traditional braise.  Oh, sure–I could brown things first, but then what’s the point of using the slow cooker?  I might as well continue cooking in the pot already being used, right?  No sense in having to wash two pots when one will do.  (I know, some slow cookers have a stovetop safe insert.  Mine does not; it is the old-school stoneware vessel pictured at left.)

Last week, I finally hit upon a stellar slow cooker recipe.  No browning, no separate cooking steps:  just a little chopping and everything goes into the cooker for 4-5 hours.  Ladies and gentlemen, I present:  slow cooker chicken adobo, a Crockpot version of the Philippines’ national dish.  (Here’s the original recipe from chow.com.)

The above linked adobo recipe calls for skinless, bone-in chicken thighs, onions, garlic, ginger, bay leaf, sugar, black pepper, vinegar, and soy sauce.  The soy sauce lends the finished dish a deep color, despite the lack of a browning step, and the long, slow cooking coaxes maximum flavor out of the chicken and onions.

Thanks to a coworker who hails from Manila, I had a supply of Gentilly-grown calamansi, a small, sour, orange-fleshed, lime-like citrus fruit (see above).  On her advice, I substituted calamansi juice for the suggested rice vinegar; she suggested that vinegar was fine for pork adobo, but the calamansi juice was a better match for chicken.  She, of course, was right:  the bright citrus flavor unified the onions, garlic, and soy.

A big bowl of rice soaked up the adobo juices….who needs chicken when you’ve got rice & gravy?