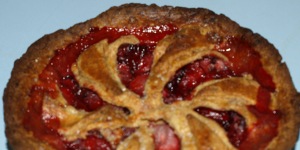 Sure, it sounds like heaven, but have I mentioned that I’m not the biggest fan of pie?  In fact, he was inspired to take up crust-making ’cause I never make pie.  While I’m happy he’s perfected his crust technique, I’m ready for some other species of baked goods and a long vacation from short crusts.

Back to the technique:  he’s settled on grating frozen butter as the best way to achieve his desired balance between flaky and crumbly.  Half of the butter is grated and tossed with flour, then the other half is left in larger chunks, to be worked into the flour/butterflake mixture.  He also says that far less water than most recipes suggest will yield the most tender crust, and a little buttermilk powder added to a whole wheat pastry crust boosts flavor and texture.

Whew.  I’m in need of fresh fruit, sorbet, or (gasp!) a week without dessert.