Now, I’m not going near a processed chicken nugget or chubb of supermarket bologna, but I do like the occasional hot dog…..fortunately, we hot dog lovers don’t need to swear off frankfurters to avoid the worst of factory-processed meats:  Niman Ranch’s Fearless Franks can be found in greater New Orleans at Rare Cuts (did you know the uptown location at Magazine & Nashville Avenue is now open?)  Available both cured and uncured, the franks are antibiotic and hormone free, just like all of Niman Ranch’s meats.  I bought a package of the uncured a few weeks ago, and the all-beef weiners proved so tasty, I went back for a second package last week.  The franks are substantial; one, split lengthwise, is enough to fill two buns (to my taste, anyway, as I cram the bun full of dill relish, brown mustard, shredded cheddar, barbecue sauce, and whatever else strikes my fancy). 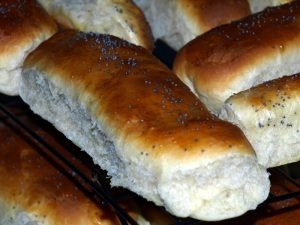 A good weiner deserves a good bun–and since we’re swearing off factory meats, why not skip the factory breads, too?  I turned to my old standby bun recipe.  It’s Reinhart’s “White Bread” recipe (the buttermilk variation) from Bread Baker’s Apprentice.  Shaping hot dog buns is easy…simply divide the batch of dough into 12 equal pieces, then stretch each dough blob lengthwise and fold it over onto itself like a business letter.  Roll the folded dough firmly against the counter, stretching it into a long, skinny baton.  Place the rolled batons a few inches apart; the buns will rise and bake into each other, creating browned tops and pillowy white sides.  An egg wash and sprinkle of poppy seeds before baking dresses up the buns a bit, though sesame seeds, coarse salt, paprika, or even a bit of finely grated parmesan can be used.

Buttermilk white bread freezes nicely; just remember to split the rolls before freezing.  Defrost at room temperature for an hour or so, or warm in a 200-degree toaster oven until thawed.