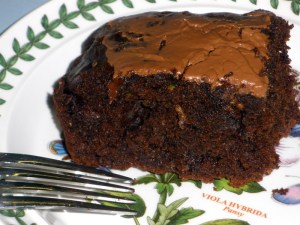 Yes, I am officially hitting the zucchini overload point–I made a chocolate zucchini cake last night (recipe from King Arthur Flour found here), and I was hugely pleased with the results.  The cake has a deeply chocolate flavor, thanks to cocoa powder, espresso powder, and a half-cup of bittersweet chocolate chips stirred into the batter; the shredded zucchini lend moisture, tenderness, and an interesting texture to the crumb.  The zucchini dissolves during baking; no traces of green vegetable remain to offend the eye or disrupt the tastebuds.

Of course, the cake was certainly helped along by a glazing of Amedei milk chocolate.  I sprinkled milk chocolate drops atop the warm cake, spreading the melted chocolate thinly over the entire 9 x 13 sheet.  Tuscan chocolatier Amedei’s chocolate drops can’t be called chips–the little buttons are intended to be eaten solo, so they aren’t full of wax like American chips used in cookies and baking.  As a result, the chocolate is lush with cocoa butter, melting on the tongue in moments.

So if you’re awash in zucchini and tired of fried, sauteed, gratineed, grilled, baked, and raw, step up to the zucchini cake.

It will allow you to feel just a tiny bit virtuous as you scarf down big hunks of chocolate cake….and you can foist off the cake on people who would refuse zucchini in its more typical forms!