Fresh bay leaves, just in time for the Olympics 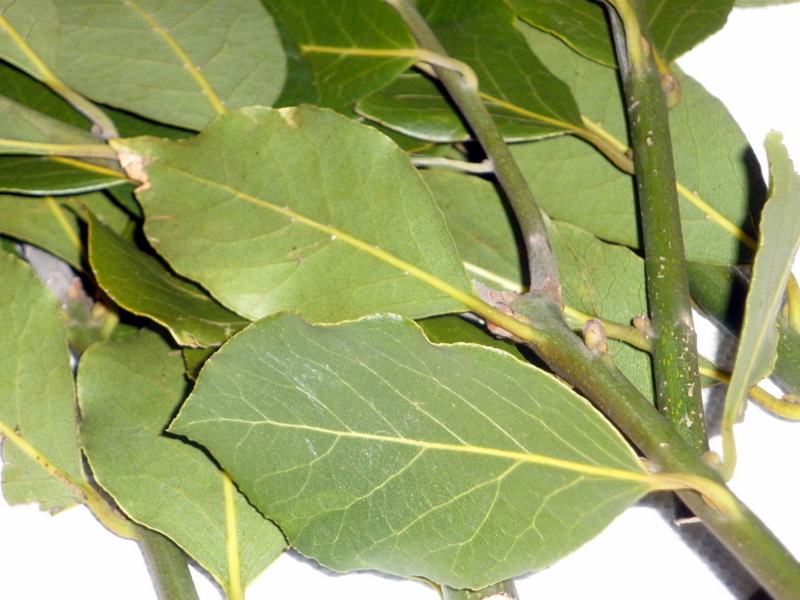 My backyard bay laurel tree is two feet tall, and it is slowly dying.  (Okay, maybe I contributed to its slow demise by picking off too many leaves….)  So I was happy to see big bunches of bay leaves for sale at the farmers’ market for the bargain price of $1.00.  I bought a whole bunch, and I plan to pick the leaves off of the branches and store them in the freezer to preserve their just-picked odor.  Meanwhile, I’ll start looking for a new, slightly larger tree to replace my fading sapling.

Fresh bay leaves are intensely aromatic, full of  a sweet, camphor-like,  almost ethereal scent. and the bay laurel (laurus nobilis), is widely grown in south Lousiana, though it is native to the Mediterranean region.  The ancient Greeks and Romans used bay laurel wreaths to crown the victorious in athletic competitions (including the ancient Olympics), military campaigns, and literary festivals (hence the modern term “poet laureate”), favoring it as a symbol of the god Apollo.  According to legend, Eros shot Apollo with an arrow of gold, while he struck the nymph Daphne with a leaden arrow, in retribution for Apollo’s making fun of his archery skills.  The lead arrow sent Daphne, in hatred, running from the amorous Apollo.  She called out to her father, the river god Peneus, who saved her by turning her into a bay laurel tree.  Apollo tended the tree, proclaiming that its branches would crown heroes and its leaves would never fade.

Some modern cooks don’t appreciate the aroma of bay–probably because they’ve only used the sad, dried-out, wan leaves sold in glass jars at the supermarket.  Admittedly, I’m partial to bay–I like any herb or spice I can find locally grown.  The still-green leaves are wonderful stuffed inside a roasting chicken, or torn into strips and braised with potatoes and onions.  Even if you don’t cook, a branch’s worth of bay leaves will perfume your kitchen with a fresh, natural, savory scent.

14 thoughts on “Fresh bay leaves, just in time for the Olympics”