When one Green Egg isn’t enough: the Mini 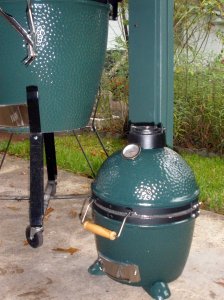 I love my Big Green Egg (size large), but I confess that my weeknight grilling is very quick & simple (think boneless chops or chicken breasts, or fresh sausages).  While the BGE takes no longer to preheat than my gas grill, its thermal mass is so great that the thing stays hot far beyond my minimal cooking times.  Oh no:  go back to gas?  After several months of cooking over hardwood lump charcoal, I can’t go back to gas.

Thus, I HAD to buy a BGE Mini:  with a 9″ diameter cooking surface, it uses a minimum of charcoal, plus it’s especially well-suited to burn the broken bits at the bottom of the bag.  No, I did not paint my house trim to match the Egg; it’s entirely coincidence.

The Mini is  just big enough for four boneless chicken thighs, or two flattened boneless chicken breasts, or four medium russet potatoes, or a few bacon wrapped hot dogs (basted with Rudy’s Sause)….followed up by a nice cherry galette or an apple crisp.

The cherry galette arose mostly out of refrigerator overflow.  Too many cherries, plus that damn 6-quart bucket of no-knead baguette dough haunted my fridge, blocking access to the soymilk, CoolBrew, and sweet tea.  I pulled off a scant handful of cold dough, pressed it into a foil-lined small cast iron skillet, sprinkled it with sugar, then pressed halved, pitted cherries into the dough.  It rose for 15 or 20 minutes, then went onto the Mini BGE for 25 minutes at 375.

Edible improvisation is delicious!  A few nights later, I made an apple crisp (though I burned the bottom, as I haven’t yet purchased an 8″ baking stone for indirect cooking).  Much to my surprise, the Mini is proving to be an excellent baking tool, every bit as useful as its big brother.