Scenes from an Italian vacation: gelato from San Crispino & Grom

With flavors like white fig, pomegranate, isabella grape, chocolate/rum, ginger/cinnamon, and caramello, gelateria San Crispino (left) remains in the upper echelons of Roman gelato shops.  Some detractors claim a recent decline in quality and an increase in sugar, but I couldn’t detect anything other than superlative flavor on my repeat visits.

A tiny Roman coffee bar, Alberto Picca, just off of the via Arenula, makes my favorite pistachio of all time:  the nuts are deeply roasted before being ground, lending a rich, browned, caramelized flavor to a classic flavor that is often flat and boring. 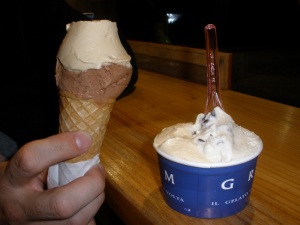 In Florence, I visited Grom (right), an outpost of a Turin-based chain devoted to pure ingredients and classic flavors.  The caramel with himalayan sea salt might be the best gelato flavor of all time….

Since Italy isn’t just around the corner, I’m happy that New Orleans has experienced a gelato renaissance since Hurricane Katrina.  In addition to the 100-year-old Angelo Brocato ice cream parlor, Gelato Pazzo and La Divina Gelateria allow me to get my gelato fix without buying a transatlantic plane ticket.  If you haven’t tried La Divina’s bourbon pecan flavor, rush right out and correct that mistake.  Any flavor with mint is a good choice, too, and the espresso is far better than most coffeeshops in town.

One thought on “Scenes from an Italian vacation: gelato from San Crispino & Grom”