Can you bake a cherry pie, Billy boy? 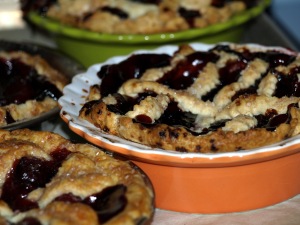 Fresh cherries are in season right now, and cherries are right up at the top of my “favorite, non-local fruit” list.  (Peaches are tied for the #1 spot.)  Fresh cherries means one thing:  cherry pie!  Yes, from scratch–not the noxious, canned cherry pie filling stuffed with red dye and waxy fruit.

Ordinarily, I’m way too lazy to pit fresh cherries AND make pie crust from scratch, but Mr. Bouillie tackled both tasks with aplomb.  (All I had to do was mix the filling and assemble the pies.)  Rather than make a single, large pie, we opted for 4 mini-pies, a perfect size for sharing.  A pound of fresh cherries, pitted, combined with a two-cup bag of frozen pitted cherries, yields enough fruit to fill one 9″ pie shell or 4 mini pies.

We used King Arthur Flour’s Presidential Cherry Pie recipe, which calls for sour cherries.  Since we had sweet cherries, which aren’t as intensely flavored as sour ones, we substituted 2/3 cup Knudsen’s cherry juice concentrate for the water specified in the recipe.  One other tweak–Instant Clearjel (modified food starch) replaced the tapioca in the original recipe.

The pies were gone in a flash, though I don’t think my kitchen companion is ready to tackle another round of cherry pitting just yet.  I’ll have to wait until his cuticles are no longer stained pink before I can have another fresh cherry pie.

4 thoughts on “Can you bake a cherry pie, Billy boy?”