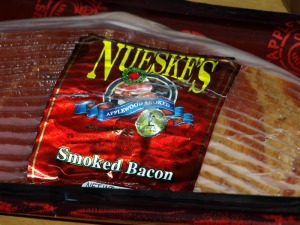 Continuing with yesterday’s breakfast theme…..the words applewood smoked bacon make my mouth water.  When preceded by “Nueske’s,” my tastebuds do a little anticipatory happy dance.  I don’t have a reliable, nearby retail source for Nueske’s, so I was very happy when a colleague presented me with a 12-ounce package of the good stuff late last week.

In contrast to cheapo supermarket bacon, Nueske’s applewood smoked bacon isn’t watery, inspid, too thinly sliced, or made with turkey.  Nor is it saturated with weird flavors, too much pepper, unsmoked, or nitrite-free.*  It’s bacon that tastes like bacon. 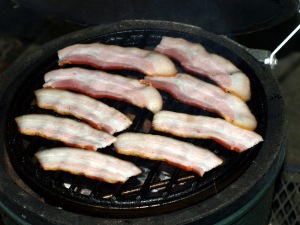 So I had Nueske’s on the brain when I rolled out of bed Sunday morning.  The sky was clear, despite earlier forecasts of thunderstorms, and I fired up my Mini Green Egg expressly to cook bacon.  [Now, if you’re thinking that a charcoal fire lighted expressly to cook bacon is overkill, I suggest that you’ve never sampled Nueske’s bacon when grilled.  ‘Cause if you had, you’d never suggest I was 75% crazy for firing up the Egg just to cook bacon.] 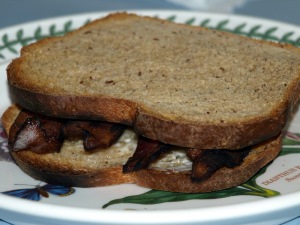 Anyway, good bacon deserves good bread, so I toasted a few thin slices of homemade whole wheat flax bread, added a thin film of bacon, and took a big bite.  Then I felt sorry for all the unenlightened who were pulling into fast-food drive-thrus for a Sunday morning pseudo-breakfast while I chewed.  Only one thing could have improved this sandwich:  a fat slice of tomato, but I’m still at least a month away from ripe, homegrown tomatoes.

*Go do some Googling on “nitrite-free” bacon.  Sodium nitrite, a/k/a pink salt, is added to cured meats to preserve color & freshness.  Some producers avoid the addition of sodium nitrite and thus label their products as such, but these items are often cured with celery juice.  Guess what’s in celery juice?  Sodium nitrate, which is mostly converted into nitrite during the curing process.