Limoncello 2010: a bottle could be yours… 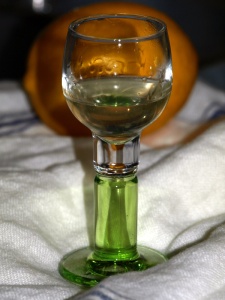 Way back in 2008, I attempted my first batch of limoncello…and boy, was it bad.  I used Everclear as the extracting alcohol, and even after dilution and two years’ mellowing, it still has an awful, harsh bite.  Sampling homemade limoncello along the Amalfi Coast in early 2010 gave me a clear flavor goal for all repeat attempts:  a smooth, slightly sweet, intensely lemony drink, with no harsh overtones.

Of course, missing is the most important raw ingredient essential to the gorgeous Amalfi flavor–the large, intensely aromatic sfusato lemons of the feminnello variety, grown on rocky soil within sight of the Tyrhennian Sea.  (But I do have beaucoup Meyer lemons, grown in heavy alluvial soil and warmed by the south Louisiana sun.) 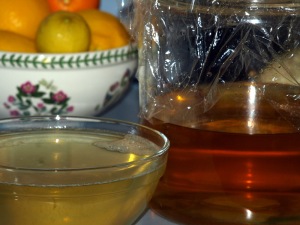 So in late November ’10, I pared the zest from a dozen large Meyer lemons and set them to soaking in Stolichnaya vodka.  (My ’08 experiences taught me that Everclear should not be drunk by anyone, under any circumstances.)  After six weeks, the Stoli turned the color of a bad urine sample (pictured, far right), the peels had faded to pale ivory, and the concoction was ready for dilution.  One problem:  the plain, infused vodka wasn’t intensely lemon flavored–it conveyed just a pale shadow of the Meyer’s aromatic bouquet.  The slightly floral, distinctly orangey flavor of the Meyer lemons needed a boost.

After drinking a few sips of Amalfi limoncello for inspiration, it hit me–flavored simple syrup to the rescue!  Instead of making sugar syrup with plain water, I used half lemon juice and half water, as well as a strip of peel added to the pot as the mixture heated.  Once diluted with the lemony simple syrup (see above, on the left), the new limoncello revealed itself to be soft and friendly, capturing the Meyer lemons’ delicacy and gentleness.

A comparative tasting of Amalfi limoncello and my Meyer-based cordial wasn’t a one-sided contest this year.  The Amalfi ‘cello is still an intense, focused drink, with a pronounced mineral tang I never even noticed until it was revealed alongside the Meyer ‘cello’s warm, orangey, flowery notes.

So….(drumroll here)….I’ve never given anything away on this blog, but that’s about to change.

In celebration of a *drinkable* homemade limoncello, I’m giving a bottle of it to TWO randomly selected people who reply to this post between now (1/4/11) and next week (12 midnight on 1/11/11).   Bonus karma points to posters who make suggestions for 2011 blog content….make sure you enter a valid email address (it won’t be displayed) so I know where to find you.