Sweet potato hash: it’s all about the smoked meat

So often, cajun cooking’s flavor is all about smoked meat.  Tasso, ham, smoked sausage, andouille, bacon:  dishes from jambalaya to gumbo to red beans begin with a backbone of smoky pork.  Ergo, the quality of the smoked pork product is important, so Hillshire Farms sausage just won’t cut it—sure, the dish will be edible, but it won’t have the deeply resonant, warm, woody tang delivered by smaller-batch sausages. 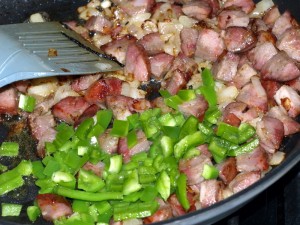 Heat olive oil in a 12″ nonstick or well-seasoned cast-iron skillet; add chopped onion.  Cook over medium heat until the onion is golden-brown; add andouille.  Continue to cook, stirring occasionally, until andouille crisps and browns slightly and onions are deeply browned.  Stir in green pepper; cook for 2-3 minutes until the peppers begin to wilt.  Add diced sweet & russet potato to the skillet, folding to mix thoroughly with sauteed ingredients.  Stir in the water, fresh parsley, and a restrained sprinkling of salt and black pepper.  Cover the skillet, reduce heat to medium-low, and cook until the potatoes are tender (about 20-30 minutes, depending on the heat level and size of the potato chunks).  Try to resist stirring, as the potatoes will develop a crisp, caramelized crust if allowed to cook undisturbed.

Notes:  this is a deceptively simple dish.  Hurry through the initial steps of browning, and the results will be insipid, like the potatoes o’brien on a cheap hotel breakfast buffet.  Take your time to get the andouille crispy and the onions deeply browned, and be patient toward the end of cooking:  the crusty reward is worth the wait.

6 thoughts on “Sweet potato hash: it’s all about the smoked meat”