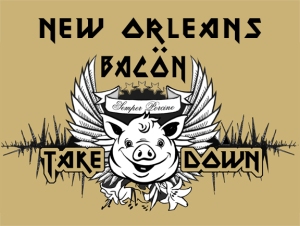 I know, bacon as an ingredient is last year’s news.  In case you’re still an incorrigible bacon fan (rather than a mere trend-seeking bacon poseur who’s moved on to goji berries or gluten-free cupcakes or Gulf of Mexico sea salt or Oaxacan cooking), you might be interested in a spot at this weekend’s Bacon Takedown.  Organizer Matt Tims says space is still available for his pork-centric food competition to be held Sunday, September 19th at 3 pm at the Howlin’ Wolf; click here for all the details.  Compete for prizes, or just for the sheer joy of playing with 15 pounds of bacon.

If you just want to watch the takedown, $15 gets you in the door and lots of bacony samples.  Or if you’ve already secured a spot as a competitor, post a comment here to let us know you’re in.